While COVID-19 stopped a lot of the club’s planned activities over the past five months, it was still a great year!

The 2018-2019 board left the 2019-2020 one in good hands with a full summer of playdates already scheduled, and the 2019-2020 crew one-upped them by adding a Beyond Brevard playdate each month to focus on visiting new areas with the support of other mothers of multiples. Local hits included parks like Westwind, Suntree Rotary, Spyglass, Fred Lee, Gleason, and North Solerno (where holiday crafts were a bonus!). Indoor locations such as Morgan’s Place, YuJump, Rain or Shine, Urban Air, and the Wickham Community Center worked for all different ages and abilities. New (and somewhat distant) places included the Orlando Science Center, District Kids in Oviedo, Fort Christmas, Children’s Museum of the Treasure Coast, and even Walt Disney World’s All-Star Movies Resort. Toss in a good measure of the Enchanted Forest Sanctuary and the Brevard Zoo and it was really a bountiful year before the pandemic pushed playdates to the likes of Virtual Show-and-Tell!

Moms’ Days/Nights Out had something to offer everyone this past year, from the nature lover to the artsy mom to those who just want to relax. There was a Sea Turtle Walk, coordinated visits to both Personalized Peach and Get Fired Up, playing Friends Trivia at Intracoastal Brewery, visiting EPCOT for the Food & Wine Festival for the second year in a row, dinner and drinks at 4th Street Fillin’ Station, and even Twisted Rooster’s final Drag Brunch! After things went virtual and plans to hit an Escape Room (among other ideas) fell through, members met online for Scattergories, Pictionary, and some chill happy hours as well. 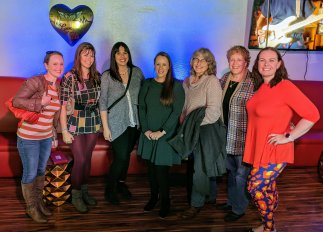 out to dinner Friday night

Five Family Events were all hits this year, and the club has started taking its “standards” up a notch. The Back-to-School Party last August was at a pool, the annual trip to Partin Ranch included a sponsored tent for a shaded lunch, and the Holiday Picnic featured a visit from Santa & Mrs. Claus! The club also did a Boo at Zoo meetup near Halloween, and again rented a movie theater to see the latest family-friendly film: Frozen 2.

Special Events took an especially hard hit due to the widespread spring cancellations, but the term kicked off with couples’ ax-throwing before the focus shifted to hosting the 39th Annual Convention for Florida Organization of Mothers of Twins Clubs (FOMOTC). It was an extremely successful weekend of “Magical Dreams in 2019” in Cocoa Beach. The club also held its second annual sock exchange holiday party in December with a great crowd, and this year’s February Parents’ Night Out event was at Hell ‘n Blazes. 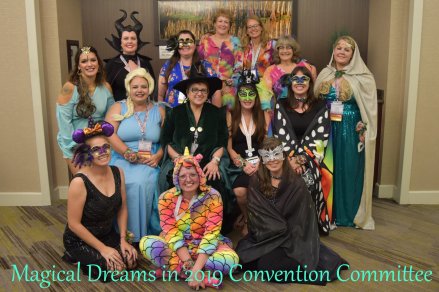 The seven board meetings took on some extra personality, as they were held at Pizza Gallery, Bold Cup, 4th Street Fillin’ Station, and an all-day planning session at Droplit.

Due to COVID-19 killing the spring, only one educational event was held this year, but with a topic like Estate Planning, those who attended took copious notes!

In addition to events, the club successfully raised almost $300 for their Welcome Baskets initiative, held a No-Bake Bake Sale as their FOMOTC philanthropy project, and boasted a Virtual Spirit Week surrounding the club’s Founder’s Day in May. The club also launched monthly Lift-Off meetings as an opportunity for members to get encouragement and support one another in a safe environment. Additionally, for a second year, members contributed to a social media campaign as part of Multiple Birth Awareness Month. There were also four drive-by birthday parades organized for the families celebrating birthdays in May and June. Lastly, it revived its monthly newsletter, Challenger, last August in an effort to better connect with members not frequently on social media.

It’s been quite the year, and although so many great ideas from the 2019-2020 board were unable to come to fruition, the 2020-2021 board is dedicated to creating a fun and inclusive term ahead!