Note: last week, a post about the sightseeing and other fun during the Convention was posted. Both reports were written by delegate Amy K. Bredemeyer.

Let me preface this report by saying that I love talking business, going to meetings, learning new ways of doing things, consulting with others confronting the same struggles, and just talking to people in general. So, I was pleased as punch that the Multiples of America convention would give me the opportunity to do each of those things and more. Below are highlights from the days spent in Alexandria, VA. Space Coast MoM members can view the entire report through our shared Google Drive.

First up in my schedule was the First-Time Attendees workshop. Most of the board was in attendance, and they introduced themselves and shared about the type of things their departments do. The dozen or so first-timers went around the room and shared their names and where they were from, and then a prize was given to the person with the youngest multiples – it was me, but not by much!

Thursday morning kicked off with the topic I was most anticipating prior to the convention: Club Networking. The format of the session had every attendee (there were probably 50 or so) state something their club was doing well, and something that needs improvement. I was very intrigued by how different all of the situations were across the country. The most popular things clubs found they were doing well included consignment sales, mothers of newborns support, and friendships being built. The top things that needed improvement were struggles to get more people into leadership roles and the attendance at general meetings, two areas that our club also has been trying to improve. I specifically picked up some innovative ideas for fundraising and holiday parties, so come to a board and planning meeting soon to hear more!

Shortly after the local networking event was the State Share Shop, which was essentially the same thing but for the state level instead of the local level. This time, attendees simply stated their number one concern. The answers were mostly variants of: how to get local clubs to join state, how to get money to host conventions, and what benefits should be offered. As I also sit on the Florida board, I look forward to chatting in more detail about these issues and what’s going on across the nation with that group.

One of the starkest differences between the state convention and the national convention was the business meeting/general session. At state, it’s about 3.5-4 hours in one go. At national, it’s slated for 9 hours over three days and MANY of the women I spoke with throughout the weekend told stories of the huge overages that have taken place in years past. The first day was a widespread agenda, with the credentials report being read, the standing rules approved, amendments to the convention program being suggested, approval of last year’s minutes, and recognition of national workers, new member clubs, and members of the year. After that, there was a cute skit to remind everyone there was still time to volunteer, then the presentation of the slate – despite the fact that it was a single slate, each nominee still gave a speech, so it was very intriguing to hear more from each of those ladies.

Following that session was a detailed look and frank discussion of the budget and bylaws. Nothing was incredibly shocking – the national group has taken a larger loss than expected in projected membership, resulting in less and less money… the same thing that has been happening around the country on smaller scales with local groups. As an example, over 600 members attended the 1997 MOA Convention, compared to the 162 at the 2019 MOA Convention, and both of those numbers reflected 1-2% of the overall membership at those respective times. 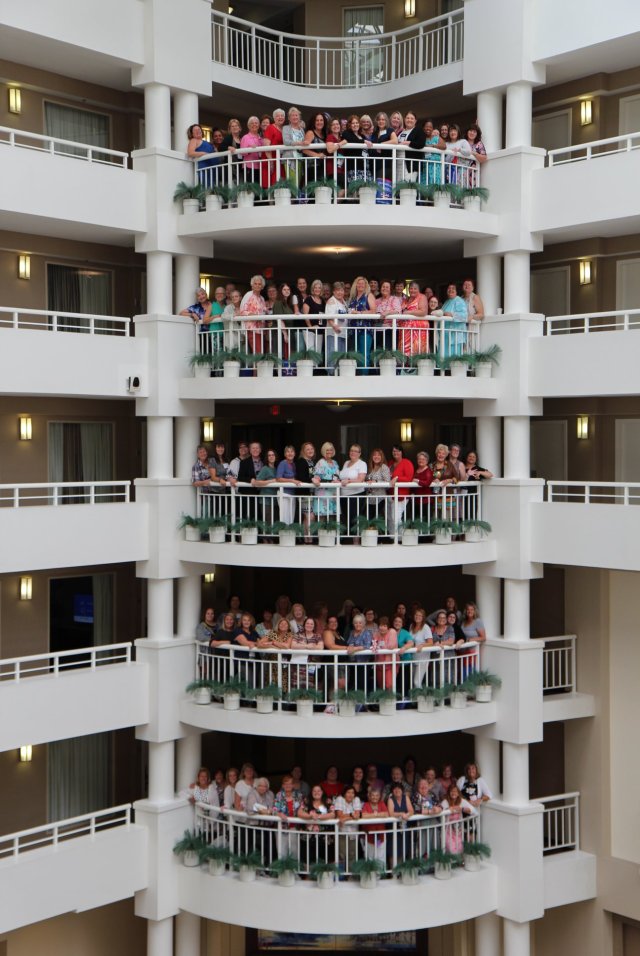 Friday morning began Round Two of the general session, and representatives from the Mid-Atlantic Twins Registry talked a bit about the health-based research studies that they help connect candidates for. Next, there were nominations for the next nominating committee, which almost had to go to a vote but one person deferred to being an alternate. After a fifteen-minute recess, the annual report was presented, which I found to be very enlightening, as each department had information to share. There was discussion about the number of clubs joining for the first time being steady, the four themes for The Notebook‘s issues this year, reports on the innovations being tried in various areas, information on the scholarship recipients and the EDGE grant recipient clubs, and celebrations of clubs hitting milestone anniversaries. I found it particularly interesting that the parliamentarian was contacted 183 times this year for help with bylaws, officer performance, potential legal issues, and other liability questions. Her biggest job, however, is really making sure that we reach quorum at the conventions, which is a fact I had not known. The finalist cities for the 2020 convention (the organization’s 60th!) are New Orleans, Raleigh, or a Carnival Cruise – the location will be finalized and published in October.

The recognition luncheon was next, and I was thrilled to have delightful tablemates to get to know better. That afternoon there were back-to-back workshop opportunities, and I attended one on writing and publishing your own book, and another about surviving and thriving with preemies. The first one was more self-interest, but the second one I chose to help gather more resources for our club’s support of preemies. Lily’s Hope was founded in 2013 and supports families in the NICU through packages of hope for parents and siblings of NICU patients. 1500 families have been helped so far, and although they are partnered with several mid-atlantic hospitals, they do ship nationwide, so this is an excellent resource that our club will be able to share with member families who might be in need. 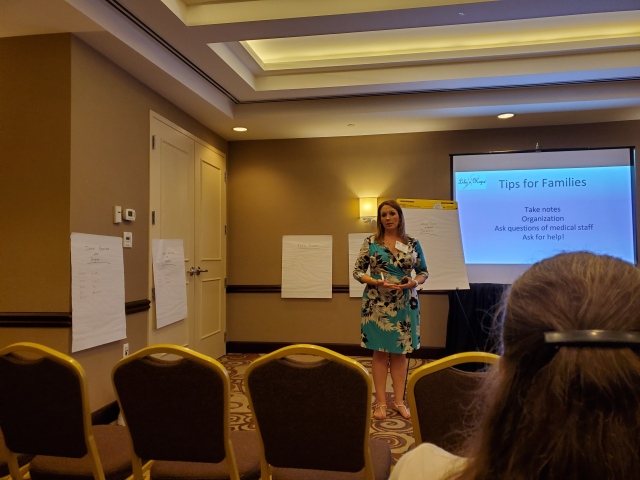 Next up was the MoM’s Mall – an opportunity for both member clubs and outside vendors to showcase their wares and do some fundraising. For Space Coast MoMs, I brought koozies that we had leftover from selling at our last state convention. Others around me sold convention discs, bandanna bags, wine stoppers, tumblers, and jewelry. 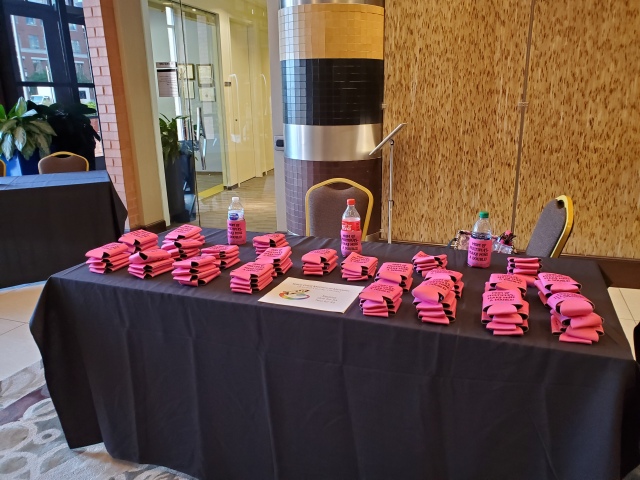 Saturday morning began with the final round of General Session, and it was one to remember! After a guest speaker from the Fetal Health Foundation, the board appointments were officially made before new business began. I was able to see all of the steps in Robert’s Rules in action when a motion was made that was highly debated and came down to a verbal count of votes! Then, after noting two scholarship donors, two members led the room in an annual tradition of singing a song where a new verse is written each year. Suggestions then started being made as to ways to improve the organization, including raising dues and providing a live video feed of parts of the annual business meetings. 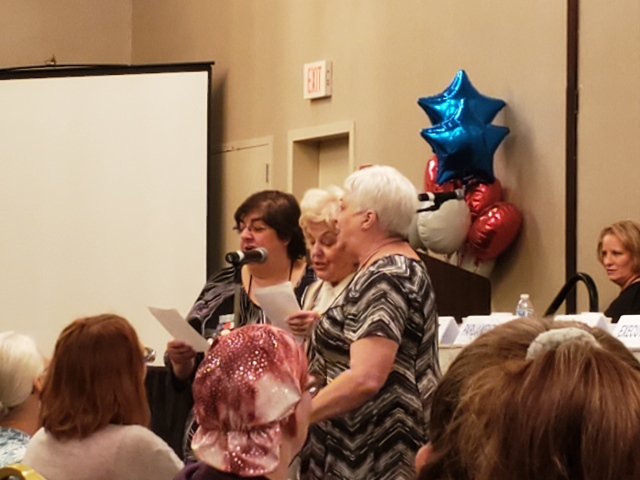 The Saturday luncheon was a highlight of the weekend, thanks to both the keynote speaker as well as the cute theme – First Ladies! Attendees were invited to don accessories as First Ladies would, though myself and several others dashed upstairs for full costume changes for the meal. (as a stay-at-home mom, I very much enjoyed the many outfits I was able to pack and wear throughout the week and made every effort to have the perfect ensemble for each!) As we entered, we were given slips of paper with the names of Former First Ladies… except the tables showed photos of the women so if you drew one with whom you were not very familiar, you wandered about a bit and asked around to find your place. It was all in good fun, and there were fun facts at each table about the women as well. The keynote speaker was Dara Lovitz, who has done a qualitative study in multiples and emotional behavior. Her focus was on the five most surprising things that multiples will tell you, and although I will not name them here, suffice it to say that my eyes did indeed fill with tears during the speech, and I was indeed surprised by four of the five points. Quite a few in the room were jotting notes, too, and I think many left with a sense of duty to “do better” for our multiples. 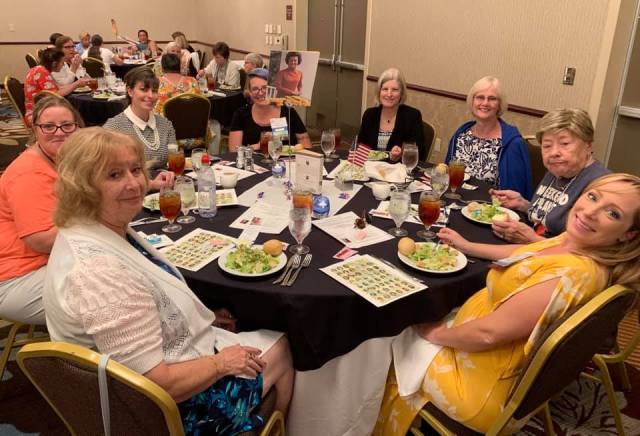 The one and only event I skipped was the Memorial Service, but I heard the choir did a lovely job.

The next workshop was with Heather Karpinsky, inventor of a twin feeding set. She talked about how her invention was born out of necessity, the steps involved to start manufacturing her product, how she has found various business mentors, and then she gave tips on how to use your passion and your dream to become an entrepreneur. I found her to be very friendly and open, which was handy because I asked the majority of the questions.

The final event of the convention was the installation banquet, and members walked through a hall of the club’s Past Presidents on the way in – beautiful sentiment! 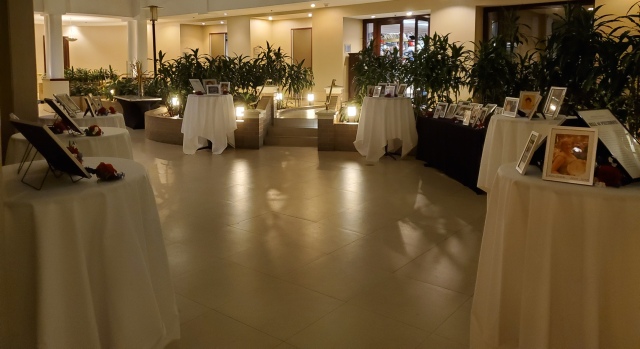 I again found myself at a table of wonderful MoMs, and had a fantastic time (and a superb seat to hear the very moving speech by the new President).  I greatly look forward to serving under her on the Research Committee – that’s right, I took the next step in this fabulous organization!

I am grateful for the opportunity to have attended the 2019 MOA Convention as a delegate for Space Coast MoMs, and I am thankful for the great conversations I had with so many MoMs there. I look forward to the 60th annual convention next year with great anticipation, and with fingers crossed that I will entice others in my local club to attend, too.