February 1st starts the second half of the membership year for Space Coast Mothers of Multiples, so it’s high time for a fresh look at the club’s demographics.

Starting with types of multiples, the club has similar numbers of boy/boy, girl/girl, and boy/girl twins. There are three triplet moms currently, with two having two girls and a boy, and one having three boys. No current members have quads or higher.

Next up: age of multiples. While many clubs across the country have their highest numbers in expecting, newborn, and infant mothers of multiples, Space Coast’s membership includes more than a third of members having 2- and 3-year-olds, and a healthy balance across the age groups. 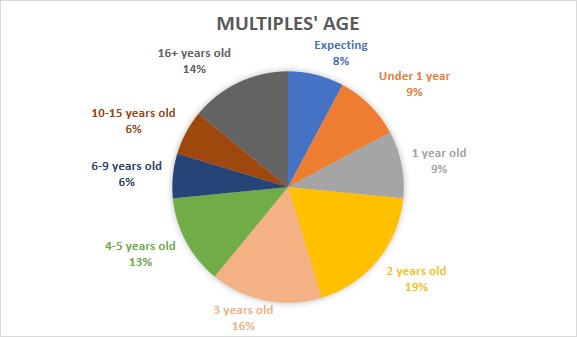 Where is the Space Coast, you might ask? It’s Brevard County, Florida, which is 72 miles north to south and encompasses barrier islands as well. As there are no established groups for mothers of multiples in the county south of Brevard, two members live in Indian River County, and there are also several long-time members who have moved out of the area but maintain their membership and active status in the club. Looking at the chart from last year to this year, there has been a shift from the most members living in Palm Bay to Melbourne housing the majority. Satellite Beach has also grown as well. In the numbers below, “other” represents the following locations, where two or fewer members each reside: Cape Canaveral, Cocoa, Cocoa Beach, Indialantic, Indian Harbor Beach, Malabar, Port St. John, Titusville, Vero Beach, South Carolina, Tennessee, Virginia.

The club’s 37th birthday is less than three months away, and their longest-active member has belonged for 27 of those years. Six more boast 15+ years in Space Coast MOM, and with the addition of recognizing Milestone Members at the annual Installation Banquet last year, here’s hoping that many more will continue to remain in the organization in years to come. 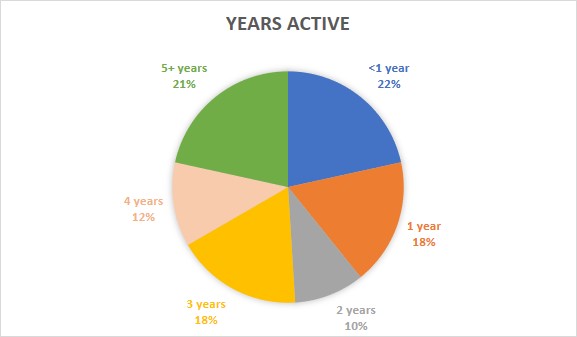 Lastly, a quick look at how many members have children in addition to their multiples. At present, there are no members with more than one set of multiples. It was an equal split between those with only twins or triplets, and those with more children, though most with more had them first!

As seen above, many different types of members make up Space Coast Mothers of Multiples. If you’ve wondered about the group in the past or are discovering it now for the first time, please reach out – more information is available and your emails will be answered promptly.

One thought on “February 2020 Member Breakdown”